The recent Newsletter of the International Center for the Sociology of Religion has been posted on the organization’s website.  http://www.icsor.it/

Available in both English and Italian, the newsletter contains information about:

All Postgraduate, Honours and Undergraduate Students are invited to
A Masterclass on ‘Critical Religion’ – How Theory that Deconstructs the Category of ‘Religion’ Can Lead to Better Research

This Masterclass is free to all students and is supported by the Centre for the Study of Violence, University of Newcastle.

Description of Masterclass
Over the last two decades, a growing number of academics who study ‘religion’ have noticed that the idea that is foundational for their scholarship is fiction. I mean fiction in the Latin sense of factus as signifying something that is made, built, or constructed.  This insight opposes notions of ‘religion’ as a thing or phenomenon that has always existed everywhere in one form or another and that continues to manifest itself in different traditions and configurations throughout the globe. Proponents of “critical religion” understand religion to be a somewhat incoherent, rather recent concept that is projected as an anachronism onto history.  According to this view, ‘religion’ is a modern, discursive product of differing, context-specific, dynamics of power with particular relation to the politics of colonialism and statecraft.  Attendant terms and ideas such as ‘secular’ and ‘sacred’ are looked at similarly.

“Critical religion” is sometimes dismissed as mere semantics and/or as irrelevant to ‘the real world’ in which religion is assumed to exist and is treated as a powerful force in law, culture and experience.  Professor Goldenberg disagrees and will argue that better thinking about government, public policy and scholarly research depends on recognizing the confusion adhering to ‘religion’ as a category of analysis and rejecting it in favor of more coherent concepts.

Prof Goldenberg will use her own work on government and feminism to demonstrate how critical religion can be productively applied.  To prepare for the masterclass, participants will be asked to read two of her papers and then during the Masterclass be invited to think about their own research projects in terms of this deconstructive approach.

The link to the application, along with more information regarding the fellowship, can be found here on our website: philanthropy.iupui.edu/fellowship

Applications are now being accepted until January 15, 2020.

For more information, do not hesitate to contact the Lake Institute on Faith & Giving at Indiana University’s Lilly Family School of Philanthropy.

16 to 19 December 2019 at the University Roma Tre, Department of Education, in via del Castro Pretorio 20.

Art. 3 – Submission of application for admission

The application for admission must be submitted or sent no later than 30 September 2019 to the following postal address:

or to the following e-mail address:  rciprian@uniroma3.it

The following documents must be attached to the application form:

Applications for admission delivered or received at the address indicated in art. 3 within the indicated deadline will be considered as having been submitted in due time.

Applications submitted with insufficient or irregular documentation and those received after the above deadline will not be accepted for selection.

On penalty of nullity, the following document must be attached to the application:

Art. 6 – Languages of the Activities

The activities of the HIGH TRAINING SCHOOL IN SOCIOLOGY OF RELIGION (SAFSOR) will take place in the following languages: French, English, Italian, Portuguese, Spanish.

I am delighted to send you our call for applications for the European Scholarship Programme@DialoguePerspectives with the request to forward them to your partners and to help us spread the word!

We are looking for future change agents in the field of interreligious/world view dialogue, and we are grateful for your assistance in identifying potential participants of our program.

As you may know, over the past five years we have established a highly successful format for interreligious dialogue with the ELES-Program DialoguePerspectives, in which over 160 gifted and socially engaged students and doctoral candidates have participated.

With the European Scholarship Program@DialoguePerspectives we are now taking a crucial step in strengthening the European perspective and, thanks to the support of the Federal Foreign Office, are building an independent European program track that enables us to work together with European students and doctoral candidates from Great Britain, France, Poland, Hungary, Sweden and Luxembourg. We want to work together with our fellows to develop strategies against (right-) populism and nationalism and for an open, pluralistic and democratic Europe.

We are looking forward to this new challenge! And time is running out: already at the end of September, the first of four seminars will take place in the new program year. Therefore, I ask for your support and I appreciate your help by distributing the attached call for applications into your networks. 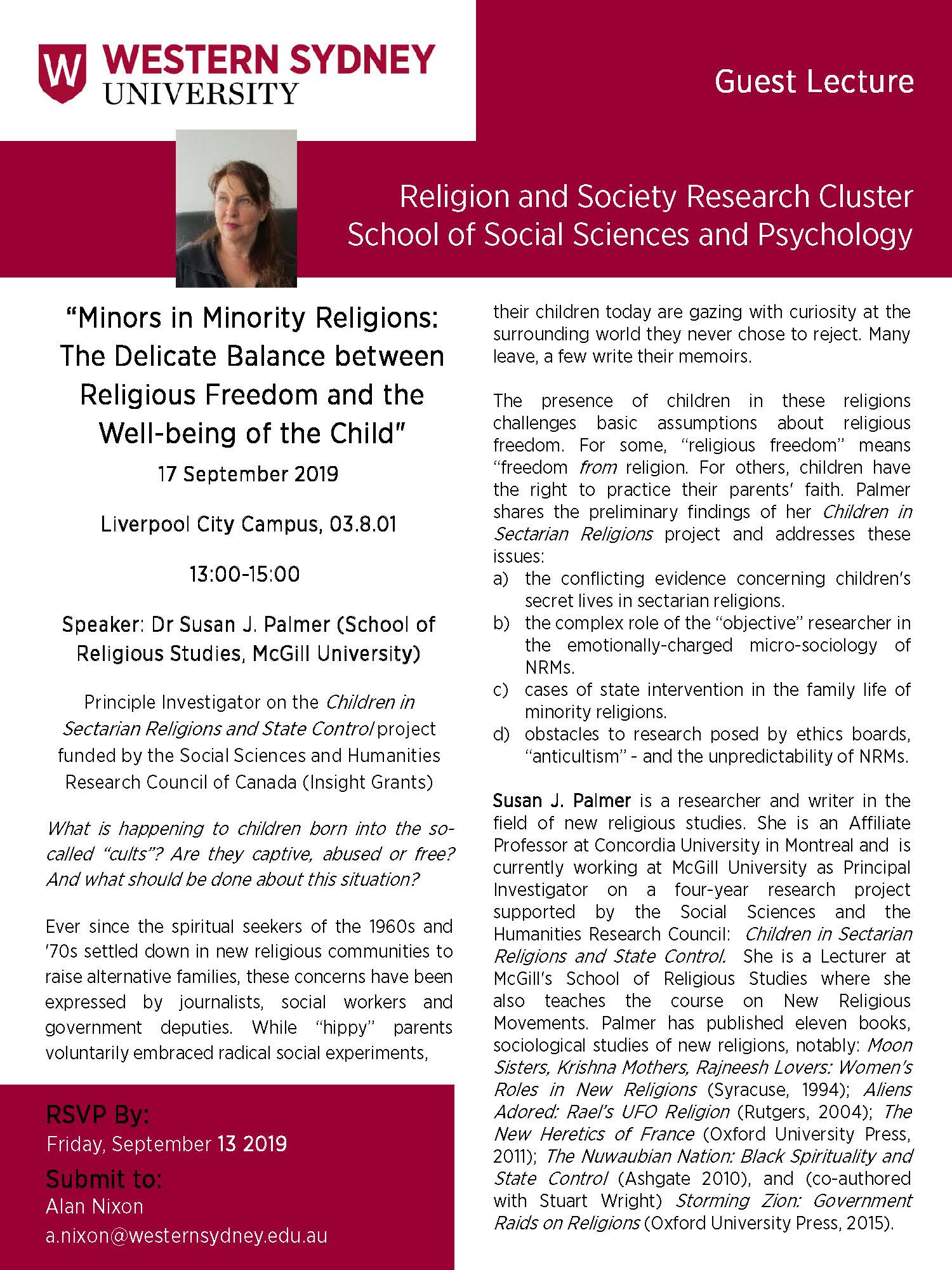 Click HERE for more information.  (Scroll down to locate these events.)

The Centre for Muslim-Christian Studies <www.cmcsoxford.org.uk>, an
independent academic centre, is seeking to appoint a full-time Muslim
Research Fellow, based in Oxford, for a three-year contract commencing
on 1st October 2019, or as soon as possible thereafter.
The Research Fellow will conduct research in the area of
Muslim-Christian studies, either  theological, historical or
sociological. The main aim would be to produce a high-quality  monograph
on an area of the candidate’s choosing in discussion with CMCS. In
addition, the Research Fellow would participate in other academic
activities at CMCS, including (for example) teaching and advising a
range of students who come to the Centre,  engaging with practitioners
in the field of Muslim-Christian Relations, and contributing on
an agreed basis to CMCS projects such as the Summer School for Christian
and Muslim leaders in training, Hikmah Guides and the Christians and
Muslims in Public Life Project.
For further information see
https://www.timeshighereducation.com/unijobs/listing/172669/muslim-research-fellow-/

Here is a job offer for a phd contract on “Islam, market and gender in Russia: Women entrepreneurs and the market of Muslim goods and services in Russia (or the CIS)”:

The deadline for application is July 14.

We are once again collaborating  with the Islamic Manuscript Association’s Introduction to Islamic Codicology course on 23–27 September 2019 at Cambridge University Library, Cambridge.

This intensive five-day course will introduce the study of Islamic manuscript codices as physical objects, or the archaeology of the Islamic book. The lectures will provide an overview of writing supports, the structure of quires, ruling and page layout, bookbinding, ornamentation, tools and materials used in book making, the palaeography of book hands, and writing Text Encoding Initiative (TEI) manuscript descriptions. During hands-on sessions, participants will examine Islamic manuscripts from Cambridge University Library’s collections and complete a series of practical exercises on codicological description.