Call for Paper Proposals, Journal for the Study of Religion, Nature, and Culture.  Proposals due June 15, 2020

A PDF of the full CFP is available via bit.ly/CV19pdf and via the website of the International Society for the Study of Religion, Nature and Culture at bit.ly/CV19cfp 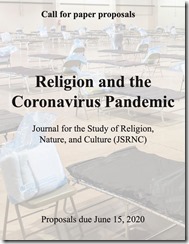 The Journal for the Study of Religion, Nature, and Culture (JSRNC) is calling for paper proposals exploring the entanglements of religion, the Coronavirus, and socioecological (aka biocultural) systems. We seek scholarly work that explores how the virus, and religious dimensions of the response to it are influencing, and may decisively reshape socioecological systems, including religious perceptions and practices.

Pandemics are nothing new in human and religious history, of course. Indeed, religion and disease have long been entwined as people struggled to understand the mysterious origins of diseases and why they sometimes cause mass deaths and concomitant social and ecological disasters. Unsurprisingly, invisible spiritual beings or forces, which influence if not control environmental conditions, have often been postulated to explain the invisible-to-the-naked eye organisms that precipitate diseases and disasters. Some theorists even contend that the roots of religion may lie in the existential crises precipitated by disease and death.

Although the history of religion is replete with examples in which disease has played an important role, there may be novelty in the current pandemic and fresh insights about the diversity of religion-related responses to it. Indeed, if apocalypse means the end of the world as we know it, the current pandemic may well precipitate profound, destructive changes. Yet as with much apocalyptic expectation, perhaps after its tribulations new and positive ways of being in the world will emerge that were previously hidden from human imaginations – or only envisioned by previously marginalized individuals and groups.